Some insights on leadership from global champion, Cathy Burke - Global Leader of Partnerships with The Hunger Project and Author of 'Unlikely Leaders'.

Cathy, the title of your book is Unlikely Leaders, including you. Why Unlikely?

I called it Unlikely Leaders because we have a global understanding of the mindset of leaders. They look a certain way, only a few people can play the role, they tend to be patriarchs and white. I want to challenge that mindset and belief that leadership resides in because as human beings, we all have the capacity to be a leader in our own lives, in our families, in our communities and in our businesses. We don’t always appear the way leaders are perceived to be, but everyone has that ability, even the most unlikely of us, to lead in everyday contexts.

In your book Unlikely Leaders, you write about the nine steps towards leadership. What have you learnt personally about leadership from your experiences?

It’s really been the making of me, I was raised in Western Australia and came from a well-educated and privileged background and it was through my genesis that has shaped my own belief of leadership.

What I have learned through the most poor / illiterate people has been the making of me, I feel like I’ve been through an immersion leadership PHD, learning through osmosis and had my mindsets challenged and confront my own beliefs.

I wanted to be that person that could bring a positive impact to people’s lives. I saw many women who were also in the same position as me going through the same journey, and I wanted to ensure the same success I achieved in my life in them. I wanted to bring change and raise awareness of these underlying issues such as corruption, child marriage and access to fresh water.

I learned that you can achieve only so much by yourself and to make a better impact, you need to collaborate with others in order to leave a legacy. The bringing together of people through the power of support, creating networks can make things lasting and meaningful.

Recently, I have learned that we are not a product of our circumstances. If we use the example of the village with hungry people, people were and are always hungry and also, their future is deemed to be hungry. Yet what I have seen through the Hunger Project, irrespective of these people’s circumstances and prevailing conditions, is that we can help create a unique future. This brings a bigger question, if we’re not a product of our circumstances, who are we? And from this, how do we wake leadership activism in others? People in villages are no different. They have always been in hunger and circumstances beyond their control. And us too in the privileged world, we are suffering from climate change and global warming. What triggers people to be active and be motivated? The existence of the issue isn’t enough to activate our leadership. I explore these issues in the book, but really owning leadership as a choice, how you step into leadership and how do you take that stand and how real things happen not because of the issue but because of the stand I take in relation to that issue. 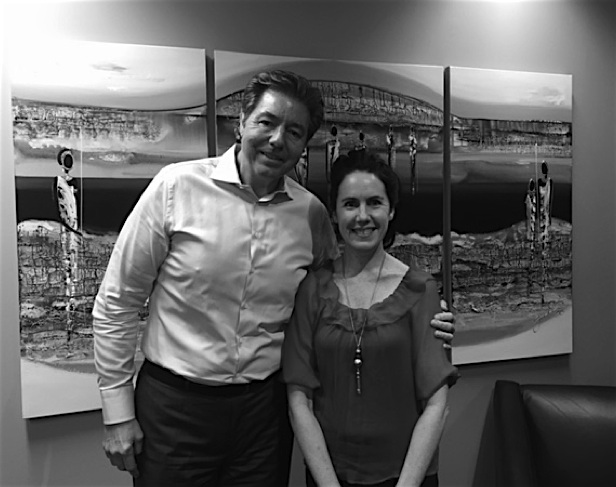 A lot of the book is turning leadership into action, what is the most profound thing that you have observed in the field, especially something that sticks with your heart and.

I think one is my very first exposure to hunger and poverty. I went to Ethiopia in 1992, seven years after the big famine. So for me seeing and being with people living in absolute chronic hunger and knowing this is reality for a billion people really opened up my mind from an ethical, moral and spiritual respect, and to not do anything about it can erode your soul. Seeing the cost myself, made me think I had to save all the people out there. If we put this into a corporate climate and from the leadership perspective, we tend to be mere followers and risk adverse and not take our own stand. But there is always a cost, and sometimes we are willing to pay for that cost and sometimes we are not.

The second thing is that I just came back from India, this time last week. I met this woman called Raker and she is from the most marginalised caste in India. She is not educated, she is in the middle of a poor state and they are currently in the middle of a drought, which has terrible consequences. She was sharing the story that there was a very small water source in her community and some men from the dominant caste were abusing their dominance by defecating in their only water source and washing themselves. The Hunger Project trained her in leadership and she raised awareness of this issue and her proposal was to install three water pumps. She raised the topic at the first village council meetings, however it got dismissed three times in the sequential village council meetings. Before calling upon the fourth meeting, she lobbied women from the dominant castes. She got their support and at the fourth village council meeting her proposal of water pumps was successful and condemned the actions of men in dominant castes. She just reminds me that terrible stuff sometimes happens and she was able to put the training into practice by thinking strategically and perseverance instead of berating with her community and not solving the problem.

You are now taking a really different role right now. After leading the Hunger Project for 17 years in Australia in the public space. Your new role now has a more global perspective, can you tell us a little bit about that.

We’ve created a fresh new role of ‘Global Leader of Partnerships’ and I’ve also been named Global Vice President. I feel very honoured, as there are only four of us. My new role is aimed at bringing together businesses, entrepreneurs and international leaders for eradicate hunger by 2030, which is one of the UN 2030 Global Goals. In the hunger project, we have something important to contribute to a whole new human endeavour particularly the notion of hungry peoples own capacity to lead, take charge and have a say on what happens in their communities, rather than being the effect of other forces (beyond their control. Here, I am really pulling together communities, businesses, leaders, to get the financial resources to a much larger level and looking at other unique collaborations we can have a positive impact.

Very exciting for you. Switching gears now, you’ve been a leader in the NGO industry in Australia for a long time now. What do you think the state of NGO leadership is like at this point in time?

It’s in a really healthy place at the moment. There’s lots of collaboration despite the notion of [not collaboration]. For example, where our office is domiciled, there are five other social enterprises and NFPs there collaborating and networking in different sectors and giving each other support. There’s a big move towards impact investing and really showing the impact they have, finding ways to partner authentically, with either people or businesses. Nowadays you can forget about going to the bank and asking for half a million dollars, but now you can rely on creativity and innovation to partner with other organisations. We are not in a service delivery business. We don’t get any funding from the government. There are a number of NFP's that derive a lot of money from government if they are providing local services and I know that could be a real squeeze for them. We always need more funding, but we have more flexibility there. It’s tough and it is always an amazing industry to be in.

You talk about the trends that you see emerging, what do you see as a true emerging global leader emerging in this space as your lasting footprint.

I know, we as human beings are capable of being so much more. Through past experiences, globally I know that whether if you are in a village in Malawi or living in Singapore, we all want the same things essentially. Helping us experience that commonality of our humanity is one I am very fond of. In the business context, the way you treat your team, how you operate and what legacy you leave on is very important. Also, I’m looking forward to having interesting global partnerships between industries and people that maybe I wouldn’t have thought of initially, as well as playing a role helping the end of hunger through unleashing humans own capacity.

When you say HR Guru in the Philippines, one name immediately comes to mind: Nic Lim.